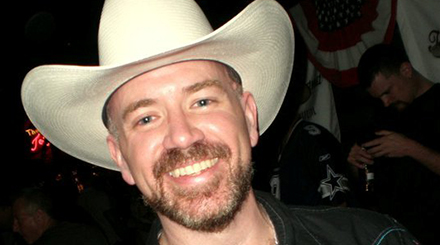 Sadly, I start this article with the recent loss (2013) of my 96 year old grandmother Jerry S. Wilcox. She was my inspiration into the antique world and especially collecting carnival glass. 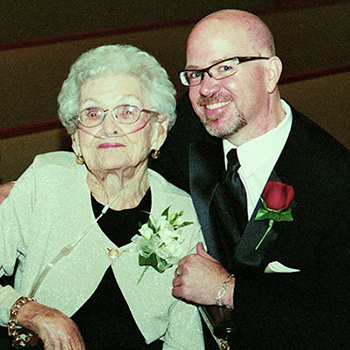 It was the summer of 1998 and we had just recently lost my grandfather to a long illness. I had always been interested in carnival glass and was first exposed to the Indiana Harvest line of grape and cable. As with most people in this hobby, I had bought and acquired many pieces in this pattern. My grandmother was a life member of the Farmers Branch Historical Preservation and Restoration Board. She truly loved the park and finding antiques for the different buildings that they had acquired, especially the Victorian home her twin brother Jess had found in Gainesville, TX. This home was eventually relocated to the park and became her pride and joy.

After a recent visit to my home, she noticed the Indiana Carnival Glass and asked me if I knew much about it? I replied “No” but just love the look and the color of the glass. She sat me down and started to tell me about antiques and what defines an antique as an antique. She quickly let me know that what I was collecting was indeed carnival glass; however it was not considered to be antique carnival glass. She began to educate me that I needed to get books and read up on antique carnival glass. Without hesitation, I went out and bought my first Edwards Encyclopedia on Carnival Glass. Wow was I amazed and intrigued at all the different patterns, colors, styles, shapes and what antique carnival glass was really about.

This was about the time eBay was really just starting to take off. Between the Edward’s book and searching eBay, I quickly realized I wanted the real deal. I had found a piece on eBay and noticed that the seller lived in Plano, TX; a stone’s throw away from my house. I contacted him and it turned out to be Richard and Carol Cinclair. After speaking to him through eBay I quickly found myself driving to his house the very next day to look at his glass. Let me tell you something, that was a sight to behold and I was in shock. I wanted to be like Richard when I grew up. It was at that visit to Richard’s house the addiction started. I had finally found my passion for collecting and soon was on the path of no return. This would have been around October of 1998 and Richard and Carol had yet to sell their final collection with Jim Wroda. I called my grandmother and told her about the gentleman in Plano and his wonderful collection. She replied, “Oh yes, he is a professor correct?” I replied yes and asked how she knew of him? She had explained that he had been to one of their antique club meetings as a guest speaker. I realized just how small a world it really was.

I had yet to really buy any old carnival glass at this time; I was still nervous that I did not know enough about carnival glass and quickly discovered that what I liked did not match the wallet of a 25 year old. Well, that Christmas my Grandmother went to a local antique store in Farmers Branch and purchased my first two antique pieces of carnival glass. This was a blue Fenton Butterfly & Berry tumbler and a hat shaped small amethyst Fenton Peacock Tail bowl. Between those two pieces and what I had seen at Richard’s, the hunt was on. The final piece that I would relate to my Grandmother would be my find of an absolutely outstanding Northwood amethyst Oriental Poppy tumbler. She had gone with me and my mother to a recently opened antique store near her home. It was not just electric but looked like a piece of Tiffany glass. I gasped when I paid $80.00 for it; however I did and am still in awe at its sheer beauty. To say how special and beautiful this piece of glass is, Cecil Whitley asked if I would consider selling it to her. I smiled, thanked her and graciously declined. What a wonderful person and gracious member she was. I wish I would have gotten to know her much sooner.

That same year my Grandmother invited Richard to give a talk to their antique club that she attended. She asked if I would accompany her to the meeting, I gladly obliged. Richard brought beautiful pieces of carnival glass and explained what carnival glass was and how it was made. This just intensified the impending addiction even worse. I was finally getting the confidence I needed and was begging to get most of the pattern names and colors; well except for Imperial which still can get me all flustered since it has been reproduced so much. 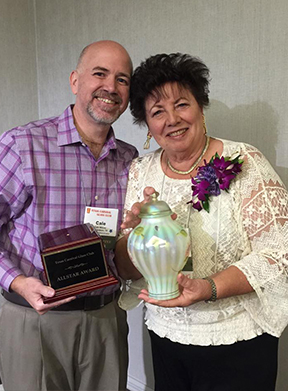 About two years later after meeting Richard and buying numerous items from him, eBay and antique store finds; I finely attend my first Texas Carnival Glass Auction in March of 2001followed by my first Texas Carnival Glass Club Convention the following year. My range of interest varies, but the first thing I look for is iridescence. I would say my collection is more about color and iridescence rather than patterns. However, I do love anything with a Peacock on it. Seems as though I have more Peacock patterns in my collection than any other pattern and they just keep multiplying. I also love good marigold, especially if covered with yellow iridescence. On a funny note, I could not stand marigold when I first started collecting. Now, it is one of my favorite colors due to the diversity of the iridescence. I also love plates, they tend to show the pattern much better and love Northwood’s Wide Panel Epergnes.

I have enjoyed meeting some of the most wonderful people from around the world that I would never have met if not for the advice of my late grandmother. I will never forget those words, “If you are going to collect antiques, it must be the real thing.” Boy how right she was. You will be missed and thank you for opening my eyes to this wonderful hobby. It is something that will always keep you near and dear to my heart.