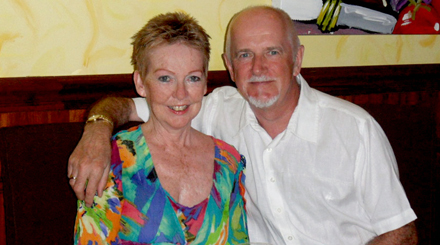 Currently living in West Yorkshire, UK. We have know each other since we were sixteen. Both retired, we like to travel, mainly to the Far East. Keith likes to write humorous poetry and has self published two books. We had a few attempts at collecting in the 70's, mainly Swarovski Crystal and Matchbox cars.

We didn't start collecting Carnival glass seriously until the early 90's. I had a couple of pieces of marigold Sowerby Pineapple & Bows that I had from my mother in the late 70's which had taken my interest.

We were not aware of any other Carnival Glass at that stage and it wasn't until we were visiting an antique center in the 90's that we learned from a colleague that there were other colors, patterns and makers. We visited the center again a couple of weeks later and were lucky enough to see a seller unpacking a giant piece of Carnival glass. We were blown away and didn't really know anything about it, but we decided to buy it anyway. That was a blue Grape & Cable stippled banded large fruit bowl. We didn't know what we had until after we got home and the rest, as they say, is history.

Most of our glass from then on was bought from antique fairs and auctions until we met a dealer mid 90's who introduced us to a much wider range of American Carnival glass. He was also the instigator in our change of direction in collecting when he brought us an Eda blue Largerkrans bonbonniere. I was smitten and from then we were hungry for European pieces. Eda is our favorite maker, but having said that, we have had unique pieces of Sowerby, Brockwitz, and Inwald . We have also had the immense pleasure of naming three previously unknown patterns: Elinke, Freija and Triumph.