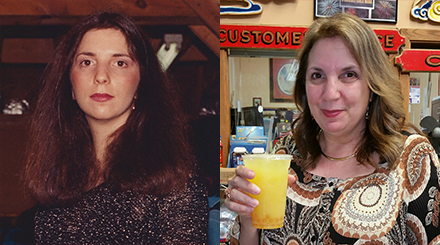 Since I was a teenager, I had been involved in antiques for several years. It all started with my Aunt Ann who was an antiques dealer and I was her helper on Sunday mornings heaving heavy boxes of glass, porcelain and jewelry to her booth at local antiques shows. Then she introduced me to a young auctioneer who gave me a job for the next few years and we had the best auctions every Saturday night. That's me, top left, as the bookkeeper and runner (or should I say Girl Friday) during one of those auctions. After that I ran my own antique shops and then finally went to work as the manager of a 300+ dealer antique mall for seven years.

Never once did I hear about Carnival glass clubs until I met a man by the name of Bob Bishop. He would visit that 300+ dealer mall and "got in good with me". He would cream that whole place every two weeks looking for Carnival glass and he never ceased to amaze me with the way he would fill up my counter and tell me about each piece.....many of them rarities judging from the fire in his eyes!

He would show me articles he had written in freshly printed newsletters from a club called the New England Carnival Glass Association. He urged me to join and eventually I did just to make him happy. Sadly, that next year, Bob Bishop passed away as I found out in one of the NECGA newsletters. I grieved for my friend and I had no desire to continue my membership in that club after my membership expired. I had never attended a meeting, gone to a convention or contributed to the group and I only knew Bob Bishop, who was now gone.

Only years later, when I matured and became grounded with my own business and responsibilities, could I think about collecting glass rather than buying it for resale. Moe Myers, who had been Bob Bishop's best buddy, approached me one day in my fireworks store to rejoin the New England Carnival Glass Club. I rejoined the club and then I looked up other clubs and their conventions and started centering my winter vacations to the Tampa Bay and the Sunshine State Carnival Glass Clubs conventions. How fortunate for me they were back to back!

The first Tampa Bay show I went to was very uncomfortable for me at first because I didn't know anyone but fortunately I met Diane Wetherbee, originally from New Hampshire, who quickly took me under her wing and introduced me to everyone, including Janet Knetchel, who also went above and beyond to make my first experience a good one. They gave me several chores to do that would familiarize me with the workings of a convention. I went to the seminars and I had the greatest conversations with members selling glass in their rooms. I met experts like the Great Tom Mordini and the very knowledgeable Gary Heavin and his lovely wife Janet who graciously asked me to sit with them at my first banquet dinner. John Rogers and his lovely wife sold me several beautiful tumblers and would soon start sending me beautiful glass on approval, no questions asked. The Remmens even gave me the privilege of helping them set up the auction hall for some additional hands on experience that year. That job is a tough one for anyone who hasn't tried it. It's sort of like Tom Sawyer "letting" you paint the fence but the pleasure was mine nonetheless! It was a good way to handle a lot of glass and it gave me the feel for contemporary and vintage glass as well.

The moral of this story is to be sure we mentor new people into this wonderful world of Carnival glass. If someone shows some interest in your hobby be sure to share some knowledge by showing off your collection and talking about it. Give someone their first piece of glass, take them to a club meeting, convention, flea market, auction or antique shop. The more they know, the more comfortable they will feel among people who have been around these conventions for years and years to come. It is intimidating not to know as much as the old pros do. Even the old pros intimidate each other!

People with a curiosity to learn or who love history generally like antiques. I found Carnival glass to be an acquired taste....it doesn't just happen.....you have to get there!

Honestly, until I joined these clubs, I never knew what really great carnival looked like. What I had been used to seeing was typical Carnival glass found in shops and flea markets with hardly any appeal. Sure, once in a while you see something spectacular but you don't see it in large doses with a super variety of colors and patterns like a convention auction offers. Thank goodness for our clubs. I would not be a collector today if it were not for the goodness of them. Long may they live!