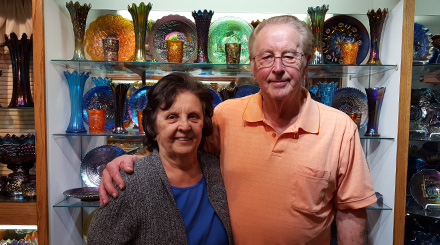 We enjoy the Carnival Glass Showcase so much.  It is the best source of really fantastic  pieces of carnival glass ever.  It is good to see so many beautiful items and learn their history.  It is exciting to see other collectors and read the stories about their collections.

We began antiquing in the late sixties when our two boys were old enough to go with us. Through a cattle auctioneer friend of Don’s we learned of an importer of English antiques in North Carolina. We quickly found out that he imported large amounts of carnival glass. To be able to buy at these dealer sales, we had to sign in a day early. After that, you could not leave the premises.  At 7 o’clock the next morning, the doors were opened. Then there was a mad rush where I have actually seen dealers fight over the items. Usually, we ended up with some super carnival glass pieces.

The next morning, we would be at some of the Winston Salem flea markets to sell. We had a very good friend who was a carnival glass dealer and would buy a lot of pieces. We were fortunate enough to save many of the pieces that are in our collection today.

Also, about that time, we learned about carnival glass auctions. Some of our first ones were at the John Woody auctions in St. Louis. Soon,we were going to Tom Burn’s, Bill Richard’s, Jim Seeck’s and others auctions.  For several years, we also sold through the Antique Trader where we learned of many other collectors. Collecting carnival glass has been a great joy in our lives. Most of our friends are collectors and we cherish our time with them.

Our mentor was a southern gentleman, Ernest Caudle of North Carolina. When we worked a flea market or show, he would be there  waiting with his wife, Lydia. He would buy on the first day, go home and call buyers he knew. The next morning he would be waiting to buy again. Usually, he had something for us. We still have many pieces that came from him. They had a great deal of influence over many carnival collectors in the earlier days of collecting.

Tom Burns was also a mentor to us. In the early days, we attended about all of his auctions. Tom is so knowledgeable about carnival and all kinds of glass and passes that along to everyone. We learned from auction to auction. He has so much enthusiasm and truly loves carnival glass. Many  pieces in all of our glass came from him. We are appreciative of his friendship.